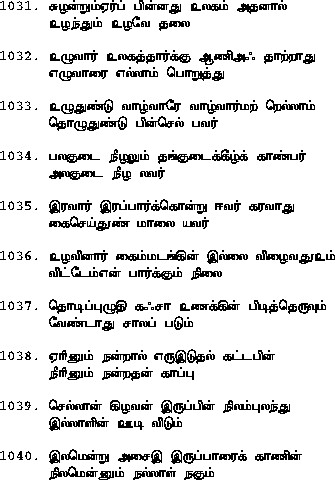 1031
Howe’er they roam, the world must follow still the plougher’s team;
Though toilsome, culture of the ground as noblest toil esteem.
Agriculture, though laborious, is the most excellent (form of labour); for people, though they go about
(in search of various employments), have at last to resort to the farmer.

1033
Who ploughing eat their food, they truly live:
The rest to others bend subservient, eating what they give.
They alone live who live by agriculture; all others lead a cringing, dependent life.

1034
O’er many a land they ‘ll see their monarch reign,
Whose fields are shaded by the waving grain.
Patriotic farmers desire to bring all other states under the control of their own king.

1035
They nothing ask from others, but to askers give,
Who raise with their own hands the food on which they live.
Those whose nature is to live by manual labour will never beg but give something to those who beg.

1036
For those who ‘ve left what all men love no place is found,
When they with folded hands remain who till the ground.
If the farmer’s hands are slackened, even the ascetic state will fail.

1037
Reduce your soil to that dry state, When ounce is quarter-ounce’s weight;
Without one handful of manure, Abundant crops you thus secure.
If the land is dried so as to reduce one ounce of earth to a quarter, it will grow plentifully even without
a handful of manure.

1039
When master from the field aloof hath stood;
Then land will sulk, like wife in angry mood.
If the owner does not (personally) attend to his cultivation, his land will behave like an angry wife
and yield him no pleasure.

1040
The earth, that kindly dame, will laugh to see,
Men seated idle pleading poverty.
The maiden, Earth, will laugh at the sight of those who plead poverty and lead an idle life.